TeraSky is a boutique consulting Integrator Company here in Israel which is highly focused and holds expertise on couple areas which no other company holds. TeraSky is the only EMC partner in Israel with the complete range of certifications for selling and supporting EMC storage and BRS solutions. TeraSky signed the Master Partner Subcontractor agreement with EMC and received the status of VMware Enterprise Partner and Veeam Gold Partner. TeraSky becomes a vendor independent integrator focused on supplying the most advanced technology solutions to their customers.

In the last 3+ years TeraSky is my family, some of them and me go a long way back . As part of my employment there I’m using TeraSky’s Labs for checking new technologies Beta’s from Vendors and also doing benchmarks for customers to show them the actual figures instead of just talking in a marketing aspect.

So the lab is quit equipped although we are thinking on changing it, it’s not bad 🙂
let’s talk business and show you with which stuff I’m playing with.

As you can above in table these are the hosts I’m experimenting with. They are Dell servers which I like very much. They do the job although they are missing some

feature in the BIOS in order to elevate more of the nesting usage. Both of them include Local drives which is used for vSphere ESXi OS. The first hosts has 2 x 140GB SAS-15K (mirrored) and the second host 2 x 140GB SAS-10K.

The environment is mixed in what we called hijacked arrays 🙂 multiple vendors with different configurations. Currently the base of the VMFS in environment is Dell PowerVault3610 and chained are four disk shelf of MD1220 which counts up 96 x 600GB 10K drives.

We also use HP StoreVirtual VSA OnTop of the allocated Da

tastores for functionality use of Veeam Backup & Replication integration.

We also have an EMC VNX5100 with 8 x 600GB 10K SAS for Fiber connectivity functionality testings.Virtual
Simulators of course are used like EMC VNX, EMC Isilon

and much more of the offered solutions to validate the products and some of th
e customer’s scenarios.

In the lab we have two switches which one of the should be DMZ altough its not actually a real one , and the other one should be for internal networking only which is also a mixed usage now. 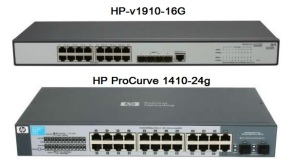 The first switch is a HPv1910 which has 16 ports connectivtiy with 1Gbps which is currently also the only ports avialble on the hosts. The second switch is HP ProCurve 1410 which has 24 ports . The Switches are flat without Vlans altough there is a sbuneting happening from the firewall and routing is also done in this level.

For now it’s enough but I’m guessing there will be more added in time.